Alginate in Food and Beverages

Alginates are also known for their properties that make them quite useful in the field of food and beverages. Those properties that make them essential in the food industry include the way they are completely organic and are a substance safe for food application. This is because alginates come from brown seaweed. Additionally, alginates are capable of thickening a solution whenever they are dissolved in water. Aside from those qualities, there is also the ability of alginates to form gels whenever they are added to a calcium salt solution. Last but the not the least of alginates properties making it  useful in the food industry is alginates capability of forming sodium or calcium alginate films as well as calcium alginate fibers. But how exactly are these qualities used in food and beverages? Read on to find out.

Meats restructed with alginate can resemble the usual cuts of meat, such as nuggets, roasts, meat loaves, even steaks

With alginate, meats can be reconstructed to resemble the traditional cuts including meat loves, nuggets, roasts and even steaks. Because of its thickening ability, it has been very useful in sauces, syrups and gravies. It’s also been used in thickening pie fillings as well as in softening several kinds of pastries.

The alginate gels can be used when it comes to reforming of food products such as mentioned above, in shaping and binding together meat pieces to the typical cuts of meat. In order to bind the meat, it usually uses lactic acid, calcium carbonate, calcium lactate and sodium alginate mixed with the raw meat. Then, it forms an alginate gel capable of binding the pieces of meats together.

Alginates are also used to re-engineer certain foods. In doing so, the same principles are used when it comes to making of shrimp substitutes with the use of alginate and of proteins using soy protein concentrate. To make an artificial food using alginate, the mixture has to be extruded in a calcium chloride bath so as to form edible fibers. When the fibers are formed, they are then chopped as well as shaped using a mold once they are coated with sodium alginate.

As mentioned before, one of the excellent qualities of alginates that make it an essential substance in the food industry is its capability to thicken a substance. As such, it can also be used as a food thickener primarily in emulsions. Alginates are commonly used in salad dressings and mayonnaise which makes it so that they are not likely to separate into their original water and oil phases. 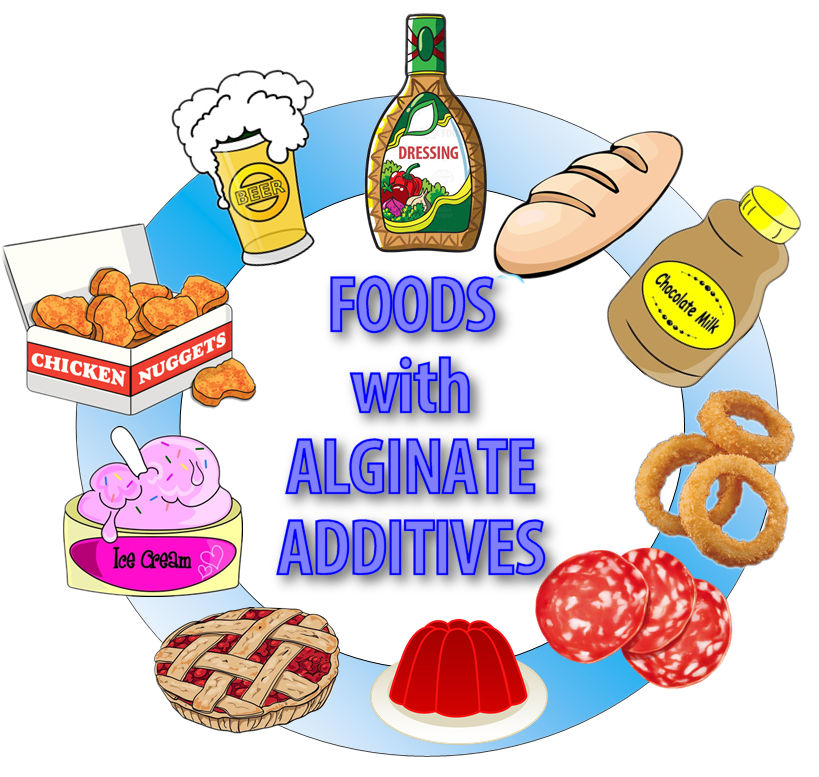 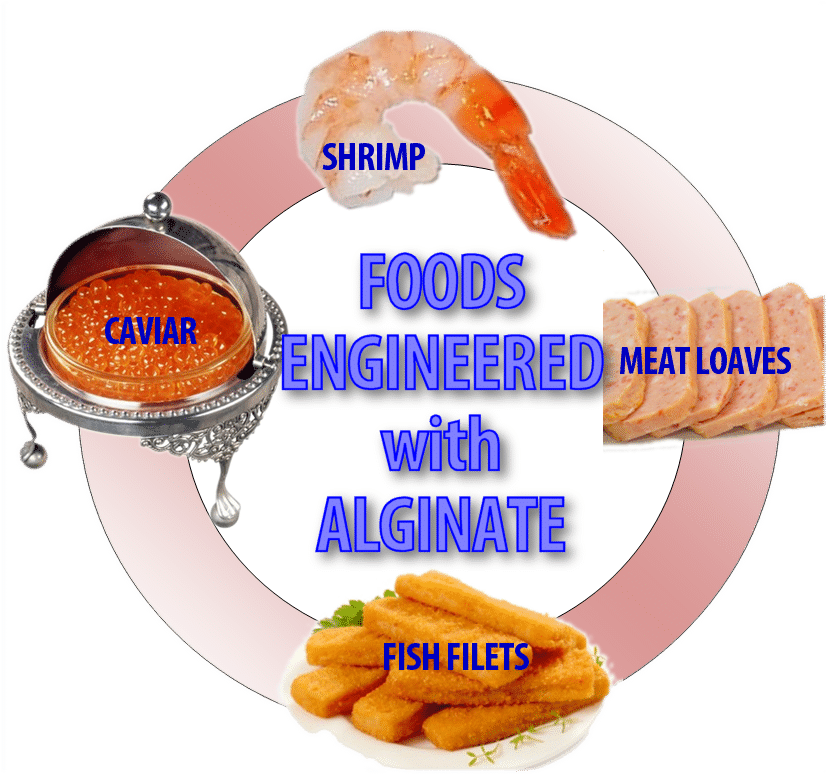 Example of food types that are modified using food grade sodium alginate. The graphic illustrates its use in modifying shrimp, caviar and the production of a variety of processed meats. 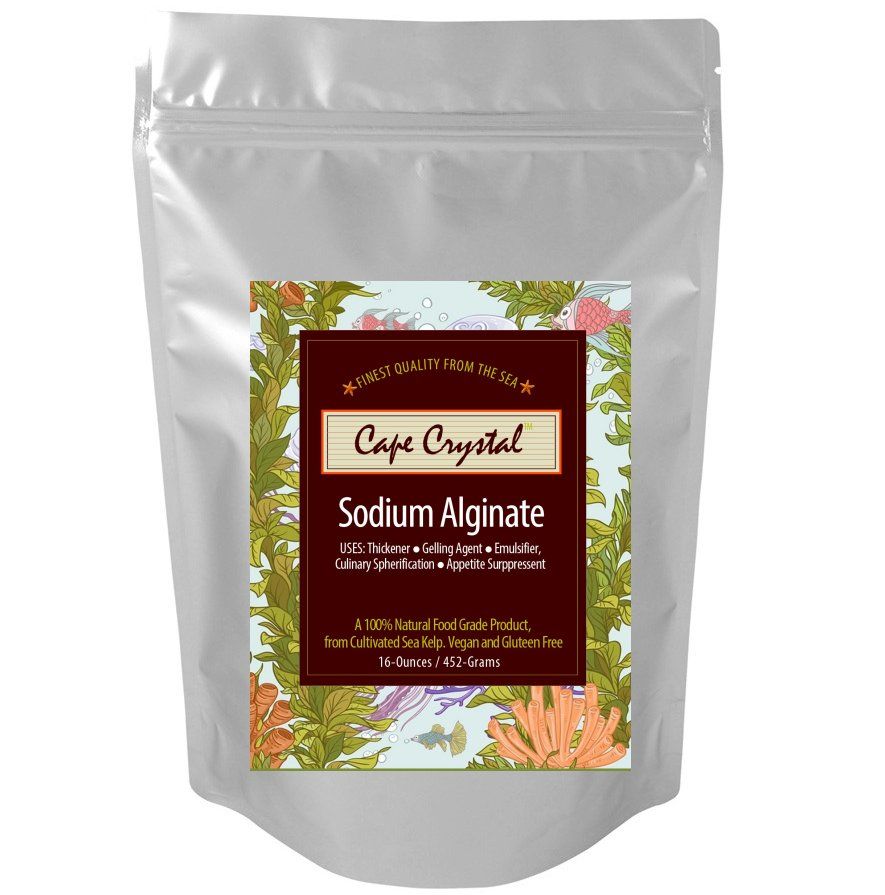 Example of of a brand of culinary sodium alginate used by chefs for culinary spherification and as a food thickner and gell producer..

Yet another use of alginates in food and beverages is that they can be used as stabilizers. They can be used in ice creams to stabilize it and reduce the ice crystal formations when it is freezing. Thus, the ice cream becomes much better and smoother in the end. The use of alginates in ice cream is even better as without alginate or any other similar stabilizer, the refrozen ice cream will have developed ice crystals which make them crunchy in your mouth.

Keeps the Foam in Beer

Alginates can also be used in beers, particularly in keeping the foams in them. As beer drinkers much prefer their beers to have some foam on top, alginate can be used to keep that foam. A lot of times, a beer with poor foam becomes subjected to judgment that it is of poor quality. Now, because of that, they began to add propylene glycol alginate in extremely low concentration so that the beer can have stable and long lasting foam on top of the newly-poured glass.

Another benefit of alginate when used in food and beverages is how it can be used to clarify wines. It can also effectively remove any unwanted coloring. In the most difficult cases of wine fining, it has been found that sodium alginate are quite effective and that’s one reason why it is used in wines and similar beverages.

Coatings and films of calcium alginate are capable of preserving frozen fish. It’s highly useful in oily fish which becomes rancid smelling because of oxidation even when quickly frozen. However, if the fish is in frozen calcium alginate jelly, it will then be protected from air as well as rancidity due to oxidation.  At the same time, using calcium alginate can help protect the fish from bacterial contamination.