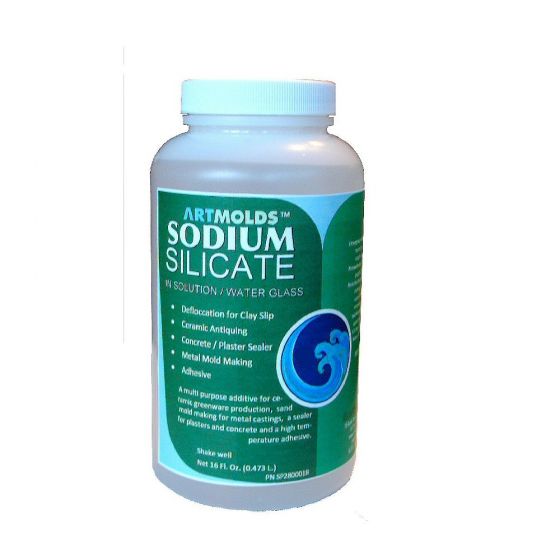 Sodium silicate is the common name for a compound sodium metasilicate, Na2SiO3, also known as water glass or liquid glass. It is available in aqueous solution and in solid form and is used in cements, passive fire protection, refractories, textile and lumber processing, and automobiles. Sodium carbonate and silicon dioxide react when molten to form sodium silicate and carbon dioxide This technical bulletin discusses just a few of its many applications for the user in, ceramics, metal mold making, concrete and plaster sealing and adhesives.

Ceramics Applications Instant Antique Finish: Brushing the surface of a thrown pot  with sodium silicate, quick-drying the surface with a heat gun or blowtorch until the surface no longer is tacky, then expanding the form from inside can give a piece of pottery an aura of instant antiquity. The sodium silicate forms a thin skin that, with applied heat, quickly hardens on the surface, encasing the so) and therefore, till malleable, clay cylinder beneath. Normally used as a deflocculant for casting slips, in this use it is quickly dried to the touch with some heat from a blowtorch. At this point, it is like a candy apple, crunchy on the outside and so) inside. When the form is then expanded with pressure from inside, the skin surface cracks enlarge in size depending on the amount of pressure and expansion. The residual sodium silicate gives a slightly glazed surface like a thin salt-glaze. The essence of the process is in the speed with which it is done, as the coating needs to stay hardand not absorb moisture from the so) clay beneath.

Clay Slip Deflocculant: Sodium silicate is the most common economical and powerful deflocculant for clay slip as it reduces shrinkage. Initial additions of sodium silicate serve to thin (deflocculate) the batch. However, there is a point after which sodium silicate starts to have the opposite effect, actually making the batch thicker (flocculting it). Compounding the difficulties is the fact that sodium silicate accelerates its effectiveness as it nears the point of over-deflocculation. For example, you might add one ounce to the batch  with little improvement in Viscosity, but the fourth addition will send the batch over the limit. That is why it is recommended to use small additions until you are familiar with slip making. ; If you add sodium silicate and the slip gets thicker instead of thinner, it is over-deflocculated, and you have two options: you can try to recover the batch or throw it away. If your slip is badly over-deflocculated, it is very difficult to correct and will cost you more in time and frustration than the purchase of new slip. If the batch is slightly over deflocculated, you can bring it back with the addition of more dry material. Determining the correct amount will be trial and error,but with every clay addition, you should mix the batch for the fully recommended _me (i.e. 3 hours for a 300 lb. batch).         If you believe you are close to over-deflocculation, it is time to switch from sodium silicate to dispersal. Dispersing agents such as Darvan can be added after you have added the maximum amounts of Sodium Silicate. Typical Clay Slip Formula: ·  Clay Blend 100 lbs. ·  Barium Carbonate 1/2 ounce (14.75 gr.) ·  Soda Ash 1 ounce (23.35 grams) ·  Water 5 gallons (19.50 liters) ·  Liquid Sodium Silicate 5 fluid ounces.

Metal or Foundry Mold Making Applications Sodium Silicate is used as a binder to form molds and cores from sand, into which molten metal is poured. Once added and mixed with sand it is reacted with either CO2 gas or esters to set (acid-set systems). How To Use It: Mix a fine grained sand (try about a 100 mesh to begin with) with 3% to 4% by weight of ArtMolds Sodium Silicate. Mixing can be accomplished in a small container by hand for small jobs. Larger batches can be mixed in a muller. Pack the treated sand into a core box that forms the desired shape. Insert any wires, rods or other support items as required. To solidify the core, apply CO2 gas from a low pressure source such as a beverage gas cylinder. The gas can be applied using a hose and any convenient nozzle. The nozzle could be just the end of the tube, or a diffuser such as a standard kitchen funnel. The object is to push the gas through the core from one end to the other, and activate the sodium silicate to bind the sand. It's also practical place the entire core mold in a plastic bag and flood it with CO2 to kick off the core inside. The cores will be ready for use immediately after becoming solid.
Sealing Concrete and Plaster Gypsums Concrete treated with ArtMolds Liquid Sodium Silicate solution  helps to significantly reduce porosity in most masonry products including concrete, stucco and plasters. A chemical reaction occurs with the excess Ca(OH)2 (portlandite) present in the concrete that permanently binds the silicates with the surface making them far more wearable and water repellent. It is generally advised to apply this treatment only after the initial cure has taken place (7 days or so depending on conditions). It is an ideal method for making plasters water repellant as well. Apply a thin coat to unpainted plaster or concrete surfaces and let dry. dry.
Use as a Bonding Agent ArtMolds Liquid Sodium Silicate has physical and chemical properties that are useful in bonding and coating applications. When applied as a thin layer on or between surfaces of other materials, the silicate solution dries to form a tough, tightly adhering inorganic bond or film which can exhibit the following characteristics: ·  Low cost ·  Non-flammable ·  Resistant to temperatures up to 3000oF ·  Odorless and non-toxic ·  Moisture resistant ·  Bondable to metals, particles (e.g., refractory     materials), fibrous materials (e.g., paper, fiberglass), glass, ceramics ·  Strong and rigid Apply a thin continuous silicate film between the surfaces to be bonded for optimum adhesion.
Opacity and Color Silicate films can be made opaque by the use of titanium dioxide or aluminum pigments. Fillers such as clay are used for semi-opaque films. Alkali resistant pigments are necessary for use with silicate vehicles. The following are suggested: ·  white—_titanium dioxide; ·  red—lime-free iron oxide; ·  blue—ultramarine; ·  green—chrome oxide; ·  black—grease-free carbon black. ·  yellow—ochre; ·  brown—umbers or siennas;
Environmental Acceptability Sodium silicates are made from sand and alkali and are universally judged to be nontoxic and ecologically harmless in fresh water environments. They are completely inorganic and therefore do not present hazards of explosion or flammability.
Shelf Life If properly stored, unopened containers may be good indefinitely. However, we strongly recommend that the product be used within a year after the date of manufacture.
Storage Store in a cool, dry, well-ventilated area, removed from oxidizing agents, acids, active metals, heat or ignition sources and foodstuffs. Ensure containers are adequately labeled, protected from physical damage and sealed when not in use. Large storage areas should bonded and have appropriate ventilation systems.
Freeze Warning It is best to prevent sodium silicate solutions from freezing. Once a container of sodium silicate has been frozen, it can sometimes be thawed using indirect or low-density heating and reconstituted by thorough mixing.
CAUTION IN HANDLING Safety and Handling Information ArtMolds Liquid Sodium Silicate may irritate or burn the skin and eyes on contact. Before use carefully read the product label. Use of safe work practices are recommended to avoid eye or skin contact and inhalation. Precautions for handling, provided on the labels of packages, should be observed. Material Safety Data Sheets are available for all products for further guidance.
Wear splash-proof goggles, rubber or PVC gloves and coveralls. When using large quantities or where heavy contamination is likely, wear: a PVC apron and rubber boots.
SDS & Information
Reviews
Write Your Own Review
Warranty

Mold Making, Casting Products and Kits: If an ArtMolds branded product purchased from artmolds.com proves to be defective in normal use within six months of its purchase or damaged during shipping, we will refund your purchase price or replace the item. Please note that most mold making and casting product such as polyurethanes, silicones and silicone paint medium have a six month shelf life. This warranty excludes damage to liquid latex products if frozen during transit (other than shipping overnight) or as a result of storage in freezing temperature environments.

Mechanical Products and Tools: If an ArtMolds-brand product purchased from artmolds.com proves to be defective in normal use within one year of purchase, or damaged during shipping, we will refund your purchase price or replace the item.

Other Products: For non ArtMolds-branded products, some products are covered by extended manufacturer’s warranties. Please contact either the manufacturer or our customer service for more information about these warranties.

Returns: If the product proves defective during the limited warranty period of six months, and you follow the return instructions provided by our customer service, then at your option, we will either provide you with a new replacement product or a refund. Products Purchased through Dealers: If you purchased any EnvironMolds item through an EnvironMolds dealer you must contact the dealer for replacement and or refund.