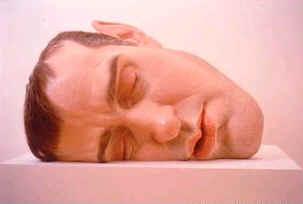 Mask II
2000
"Peek inside and you can see teeth, gums and even a little faux saliva," writes Plagens of "Mask II." "Stand beside it for a moment, and you'll swear you can hear him snore." 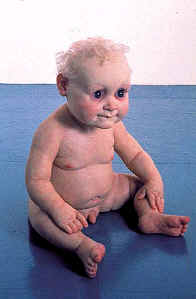 Mueck, Ron  (1958-  ) Ron Mueck is a London-based photo-realist artist. Born in Melbourne, Australia, to parents who were toy makers, he labored on children's television shows for 15 years before working in special effects for such films as "Labyrinth," a 1986 fantasy epic starring David Bowie.
Muek then started his own company in London, making models to be photographed for advertisements. He has lots of the dolls he made during his advertising years stored in his home. Although some still have, he feels, "a presence on their own," many were made just to be photographed from a particular angle—"one strip of a face," for example, with a lot of loose material lurking an inch outside the camera's frame.
Eventually Mueck concluded that photography pretty much destroys the physical "presence" of the original object, and so he turned to fine art and sculpture. In the early 1990s, still in his advertising days, Mueck was commissioned to make something highly realistic, and was wondering what material would do the trick. Latex was the usual, but he wanted something harder, more precise. Luckily, he saw a little architectural decor on the wall of a boutique and inquired as to the nice, pink stuff's nature. Fiberglass resin was the answer, and Mueck has made it his cold cast bronze and marble ever since.
In the three years since his participation in Sensation: Works from the Saatchi Collection, Mueck has posted shows at major galleries in New York, Germany, not to mention selection for the London Millennium Dome and now his work is the subject of a solo exhibition at that city's highest profile contemporary art space, Anthony d'Offay gallery. 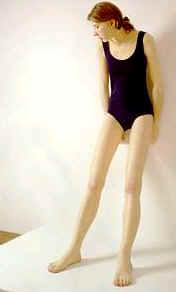 A seven-foot adolescent girl in a bathing suit, "Ghost" was "the perfect metaphor for her poignant discomfort with her own body"

From the Tate Museum Collection 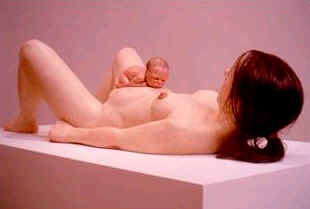 Mother and Baby
2001 "Mother and Baby" is "the most unflinchingly affectionate portrait of childbirth you'll probably ever see," according to the critic