One of the more traditional and enduring mold making mediums is latex rubber. The raw material comes from the sap of the rubber tree from plantations in Asia and South America. The sap is then compounded with certain additives, which when formulated can be classified into mold making rubber and slush casting or dipping rubber. The latter material being used for latex gloves, balloons, condoms, masks, props and coatings among its standard uses. Whereas, mold making rubber is used as its name implies, to make traditional molds. Latex molds have been a standard in the plaster and concrete casting and the furniture industry as well as used by hobbyists because of its low-cost, long-lasting mold life and its natural resistance to abrasion. Though it is slowly losing market share to manmade mold rubbers, natural latex rubber formulations are still widely used for reproducing art and of course for mask making and stage props.

So image my surprise when I received a call a few years back requesting latex for use in an oil painting. The artist explained that she wanted to create color latex rubber applications, which is normally an ivory color when it cures, but over time darkens to a beige-brown. Her purpose was to give her paintings a three dimension look. As we spoke and I thought about it, I felt that could be an excellent application. I suggested that she mix the latex with our latex pigments as other color bases (acrylic, oil, et. al.) would tend crack over time as those were not flexible, whereas latex paints were. She ultimately purchased the slush casting latex and the latex pigments. Soon after she emailed a photo of the results, and her latex augmented landscape was spectacular. The dimensional surfaces she created cast subtle shadows on her background colors. She told me that when the viewer moved the picture seemed to move as well, as a result of the changing shadows.

Since that call a half-dozen years ago, I have received other similar calls from painters wanting to experiment with latex canvas applications. I was happy to describe my experience with the those artists and was able to provide additional recommendations based on the feedback I received from the first latex customer. Then about four years ago I received a call from a portrait artist asking about latex applications. I was ready to launch into by now, my practiced explanation,of building up the latex with successive coats allowing each to dry before applying the next using a hair dryer that we found to be the best tool. As I began he stopped, me and corrected me. He didn't want to use latex for dimensional paintings. He wanted to use it to mask his paintings to prevent one color from getting into specific areas of his work. He explained that he would do a broad brush color, add latex masks on top and then apply other colors. When he finished he would strip off the latex mask with the result of achieving a sharp outlined color where the latex mask had been. Since his call I have received several other artists' calls looking to use latex for canvas masking.

Perhaps the most intriguing non mold making use of latex I received was from a sculptor in upstate New York, well-known for her equine sculptures and imaginative large equine mobiles. She asked me if I knew any way to capture the hoof prints of galloping horses. She explained that she was creating an installation for a New York Gallery and visualized a piece that could take up the entire floor with deep depressions of hoof prints similar of what is found across a field where horses run. Over the next three weeks of calls back and forth we came up with the idea of creating a large latex mat with embedded hoof prints molded into it. She would make plaster castings of the hoof prints in her own field and lay them out on top of sheets of Masonite(tm) spread across her studio. Then with paint rollers and paint brushes she and her helpers, applied twenty gallons of liquid latex in layers until she built up twelve of them so that the rubber mat was about a quarter inch thick. Her piece was a big hit at the gallery opening with visitors wondering just how she pulled it off. I understand one of her horse loving clients now owns it and displays it as an interesting wall hanging.

One of the best parts of the job is meeting and talking to all the creative people from so many artistic disciples. They have educated me through the years to think outside the box when it comes to the application of art materials. Early on when I received a question about material usage, I was quick to discourage the non-traditional use of our materials. "It wasn't formulated for that application," I would reply at such an inquiry; but not anymore. As when I hear a question about a non-traditional application I always pause to ponder if it could actually work for that unproven purpose.

With an open mind and a little thought I more often than not encourage such non-standard uses, as it adds to an artist's creative portfolio and also to the admirer of the artwork being struck by such a unique non-standard use of art materials. The moral here is for every artistic mind not to be afraid to try a new twist in applying traditional materials or don't be afraid to try a new material, as it will reinvigorate the imagination. So now it has been demonstrated latex can really make your artwork bounce, it is your turn to take the ball and run with it! 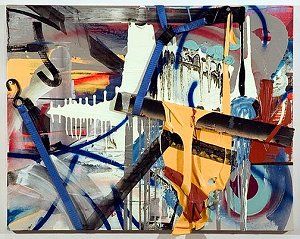 Maggie Michael, "Between Björk and a Lame Duck President," 2008 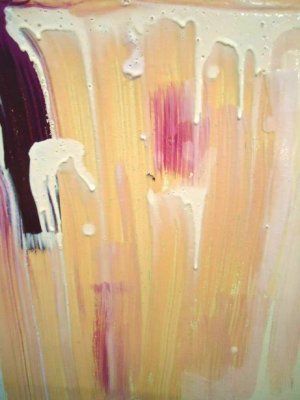 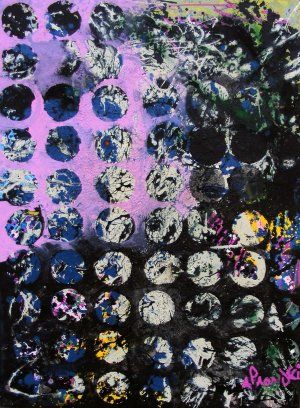 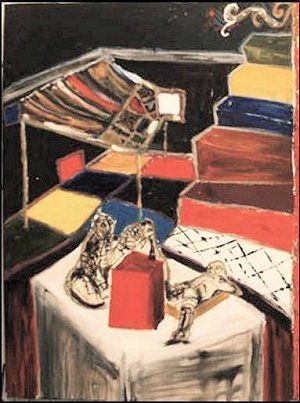