(1986-7)
The moment when Adam and Eve were expelled from the Garden of Eden pathos and emotion of Renaissance interpretations. The dominant element of the tableau is the painted backdrop and the nude man and woman, holding leaves in front of their private parts. 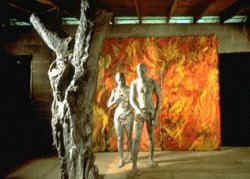 (1924-2000), American sculptor, known for his life-size white plaster casts of human figures. Segal was born in New York City. His plaster figures, left rough and unfinished with vague, indistinct features, are placed in mundane or lonely sculptural settings, such as elevators and diners. He was the winner of a competition for the design of a Holocaust memorial. Full-size sculptures by Segal sell for $125,000 and up.

The Legend of Lot

1958,
It was one of Segal's first sculptures and a pivotal work in his career.

1924 -- born in New York.
1940 -- moved with family to South Brunswick, New Jersey.
1941-42 -- studied the Cooper Union of Art and Architecture in Manhattan, obtaining his diploma in 1944.
1942 to 1946 -- studied philosophy and literature part-time at Rutgers University, New Brunswick.
1946 -- married Helen Steinberg.
1947-48 -- studied at the Pratt Institute of Design, Brooklyn
1948-49 -- studied at the Educational Facility of the New York University, graduating BS Art Education.
1955 -- taught at Highland Park Community Center
1956 -- first one-man exhibition at the Hansa Gallery
1957 -- represented at the exhibition The New York School: Second Generation at the Jewish Museum, New York.
1958 -- began experimenting with plaster, burlap and wire mesh.
1961 -- taught painting at New Brunswick discovering the technique of using medical bandages as material for his art and used himself as a model for Man at a Table, his first plaster cast using bandages.
1961 -- 1964 -- taught at Roosevelt Junior High School.
1963 --  received a Master of Fine Arts from Rutgers University and traveled in Europe.
1963 --exhibited at the Galerie Ileana Sonnabend.
1968 -- had his first one-man museum exhibition at the Museum of Contemporary Art, Chicago, and was represented at the documenta "4", Kassel.
1968 -1969 -- taught visual art and sculpture at Princetown University.
1970 -- was awarded the degree of honorary doctor at Rutgers University.
1971-72 he had a retrospective at Zurich, Munich, Cologne, Rotterdam, Paris, Leverkusen and Tübingen.
1972 -- was Associate Guest Professor at City University, New York.
1977 -- worked on a sculpture for the Franklin D. Roosevelt monument in Washington.
1978 -- was given a comprehensive retrospective at Minneapolis, San Francisco and New York.
1979 -- published a pamphlet on plaster cast technique in Rome which was brought out by the Metropolitan Museum of Art.
1982 -- retrospective of his work toured Japan.
1983 -- designed a cover for Time magazine.
2000 -- Died