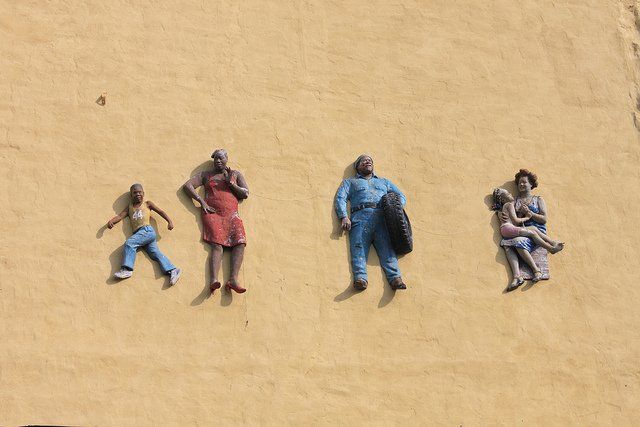 For many years John Ahearn (born Binghamton, New York, 1951) lived and worked in the South Bronx of New York, where he created the majority of his castings in collaboration with artist Rigoberto Torres. Though he may be best known by many for his “repetitive life casting” of real people in his South Bronx neighborhood, John Ahearn has been bringing his artistic works to communities around the world – as well as galleries and museums – since the early 1980′s. One weekend for example, weekend in the Bronx  at Welling Court were treating neighbors to a live casting of one fortunate (and apparently not-at-all claustrophobic) young girl named Karlee. Surrounded by an enthusiastic crowd, Ahearn and his assistant demonstrated his casting process, from start to finish.

Ahearn was a founding member of Collaborative Projects, Inc., and co-organizer of the Times Square Show, 1980. Ahearn and Torres have worked together on many projects since the early 1980s, including murals in the South Bronx and an exhibition at the Bronx Museum - Portraits from the Bronx: Life Casts from 1979 to Present. Work they did in the 1990s includes the East 100th Street Sculpture Project, a GSA commission in Baltimore, and a public project in Caguas, Puerto Rico: an outdoor mural of sixteen athletes. A survey of Ahearn and Torres's work, South Bronx Hall of Fame, was organized by the Contemporary Arts Center, Houston, and traveled to museums in Europe and the United States. 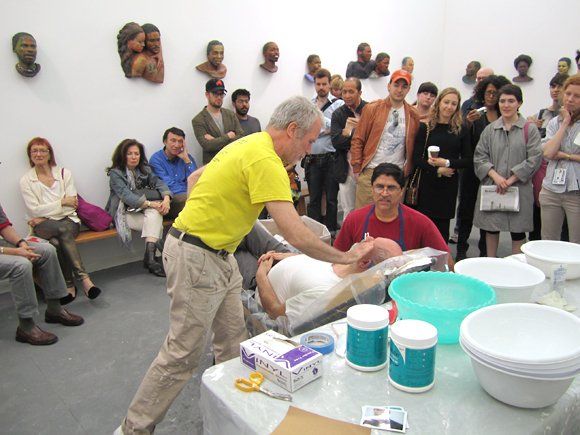 Mr. Ahearn, who is 61 year old explains how he and his artistic partner, Rigoberto Torres, have made art for the past 30 years. They cover their subjects’ faces and shoulders with a skin safe molding material called alginate, similar to what dentists use to make molds. Then he applies a layer of plaster bandages to provide a rigid shell mold. His subjects breathe through straws while the materials harden. The whole process takes about 20-minutes. The two artists then take those molds and fill them in with plaster to make positive casts, which they build up and carve, and paint into startlingly lifelike wall reliefs.