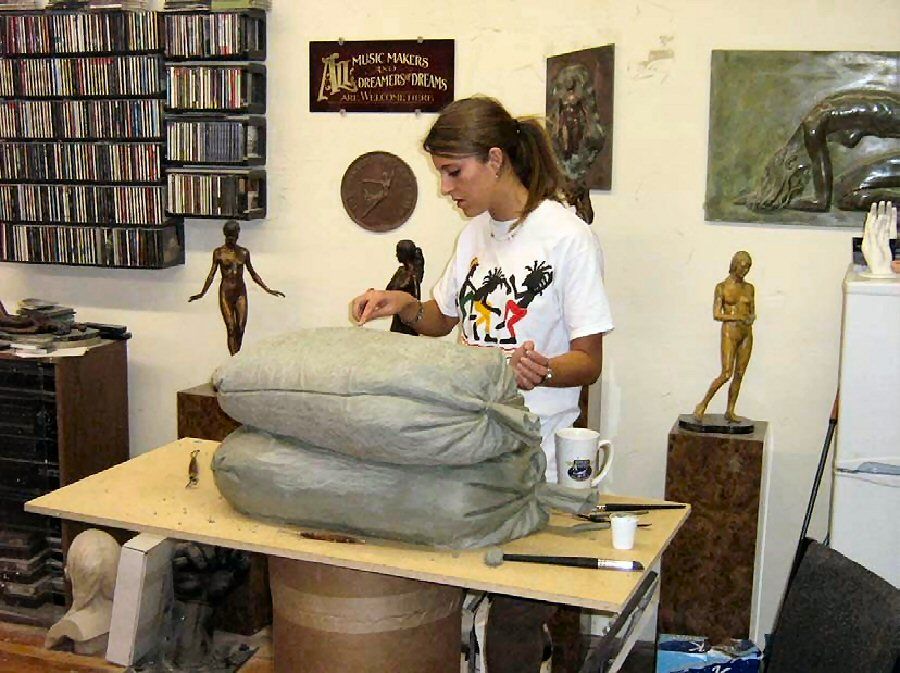 Photo 1. Kelsey, is finishing the texture on two sandbags, which we had sculpted one and a half times life size, as part of a veterans’ tribute garden for the City of Westminster, Colorado.

Rule #11 on my studio wall under “Dave’s Laws” is, “There is almost always a better way.” While “better” might be an equally effective method or process but faster and/or cheaper, what is much more important to me is a method or process with more perfect results or allows me to do something that had been beyond my capabilities.

Something that I had not been satisfied with was a way of securing the rubber inner layer of a mold to the supporting or “mother” mold.

In photograph #1, one of my assistants, Kelsey, is finishing the texture on two sandbags, which we had sculpted one and a half times life size, as part of a veterans’ tribute garden for the City of Westminster, Colorado. The next step would be to make a one-piece rubber mold of the two sandbags. Being one piece would allow the foundry to produce a single wax of both sand bags. Even if the foundry decided to cut the wax into smaller pieces for casting, I was hoping that the bronze pieces would likely fit back together more

The most common is to use pill trays as molds for neat and uniform rubber keys. 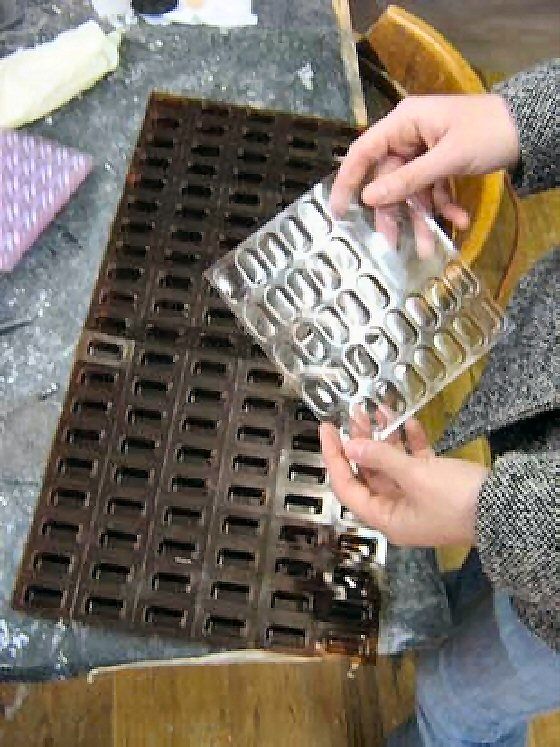 Photograph 2. There are any number of ways to lock the rubber to the mother mold. The most common is to use pill trays as molds for neat and uniform rubber keys.

These are especially effective if the keys are attached by its smallest side causing them to lock into the mother mold. (See photographs #2 and #3.) These keys can be used anywhere such as on the sides or around the opening of the mold. However, they can be difficult to lock into place.

As I considered the problem and its solution, a number of things occurred to me. First, the device would have to be made of rubber with good elongation. Also, its base would have to be wide enough to allow for a firm bonding to the rubber mold. And coming out from the base, it would need to start out narrow and widen so that it would lock into the mother mold. Since it is easier to pull something into place than push it, a narrow part would have to extend through a hole in the mother mold far enough to be grabbed onto and pulled. So, I got a piece of clay and shaped something that seemed to fit the bill. What I came up with is in photograph #4. It was only then that I realized that I had reinvented the baby bottle nipple or perhaps come up with a design for a very stable bowling pin that could transform bowling into a sport more like hockey or soccer, i.e. one with very low scores.

The next thing I did was make a copy in silicone rubber. All I did was fill a small cup with alginate and press in the clay model. As soon as the alginate had set up, I extracted the clay and a poured in the rubber, a tin cured silicone with a durometer of eight. In photograph #5, I am holding the prototype fastener and the alginate mold. I could have used this mold at least several more times, but since the alginate would have soon deteriorated, I made some molds in more durable materials, plaster, polyurethane resin, urethane rubber, and Forton MG. These molds were made the same way as I had made the alginate mold except that the rubber fastener was put into cups of the other materials which all worked about equally well. All castings were cured under a pressure of 50 psi. While not absolutely necessary, pressure casting does eliminate bubbles.

In photograph #6 we had applied four layers of thixotropic tin cured silicone rubber and placed the fasteners where I felt they would be most needed on the sides and around what would be the opening for the mold. The fasteners were held in place until the rubber set up with hat pins which are barely visible in the photograph.

One of the real advantages of silicone rubbers is that they really bond together. I could make a supply of fasteners and even after a year, they would still bond perfectly to uncured rubber. Urethane rubbers are not as forgiving to work with though I could have used urethane rubber in this article.

The finished mold is in photograph #7. The mother mold was made using Forton MG and cotton batting with scrim binder. This method allows for a mold of even this size to be only about 1/4 inch thick and there for relatively light. (For a more thorough description of this process, see “Secondary Molds in Life Casting Part II,” Sculpture Journal, Nov. and Dec. 2004 by yours truly.) I simply built the mother mold around the bulb part of the fasteners. Notice that the ends of the fasteners protrude out from the mother mold.

If you are still awake, you may be wondering, “Why bother?” Well, we took the mold apart, removed the clay sand bags and reassembled the mold. The fasteners positioned the rubber perfectly into the mother mold and assured that the rubber stayed securely against the sides. The really slick thing was how easy it was to poke the end of the fastener through its hole in the mother mold and pull it into place. (Photograph #8.) It was easier and more effective than any other method I had used in the past.

I can’t keep calling my little innovation “the fastener,” I need a name for it. Perhaps I should call it “the Parvin.” I have been trying to come up with something that Parvin could stand for. The “Pa” could be “perfectly awesome,” but the “rvin” is giving me trouble. Maybe "Irving?"