Pharmaceutical grade sodium alginate, also called as, is a kind of white or light yellow granular or powder, which is almost odorless and tasteless

Alginates are known as natural polymers and are used widely in the food industry because of their qualities of non-toxicity, biodegradable, biocompatible and easy availability. In the pharmaceutical industry, however, it is the bioadhesive quality of alginates that makes it really useful. They can be used and formulated as matrices, gels, microspheres, membranes and more.

The alginate can also serve as a chelator, a substance that can remove the heavy metals – toxins – in your bloodstream simply by binding them. There are heavy metals in the bloodstream because of reasons including diet, exposure to certain materials and to environment. In a study, it’s been found that specified doses of sodium alginate can effectively reduce the absorption of strontium, a heavy metal known to cause problems such as bone cancer, Hodgkin’s disease, leukemia and more.

Compared to placebo, alginate has shown greater weight loss that can be attributed mainly to the effective reduction of body fat’s percentage. On the other hand, in the ITT analysis, there is not any difference between the treatment groups in terms of the plasma concentrations of insulin, ghrelin, glucose, C-reactive protein, lipid metabolism and HOMA-IR.

One common use for alginate is in cosmetics wherein it is used for its functionality as a moisture retainer and thickener. With these qualities, alginates have been used in several applications such as in retaining a lipstick’s color on the lip surface. It works so by the alginates forming a gel-like network that works on retaining the color of the lipstick. 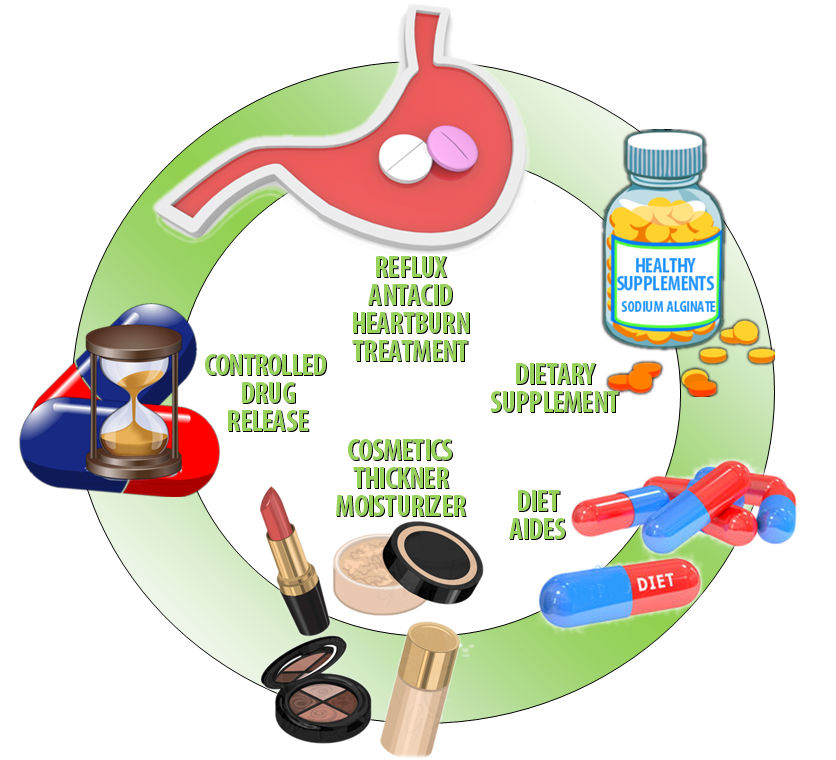 Some of the more common pharmaceutical uses of alginates in drugs, supplements and cosmetics. 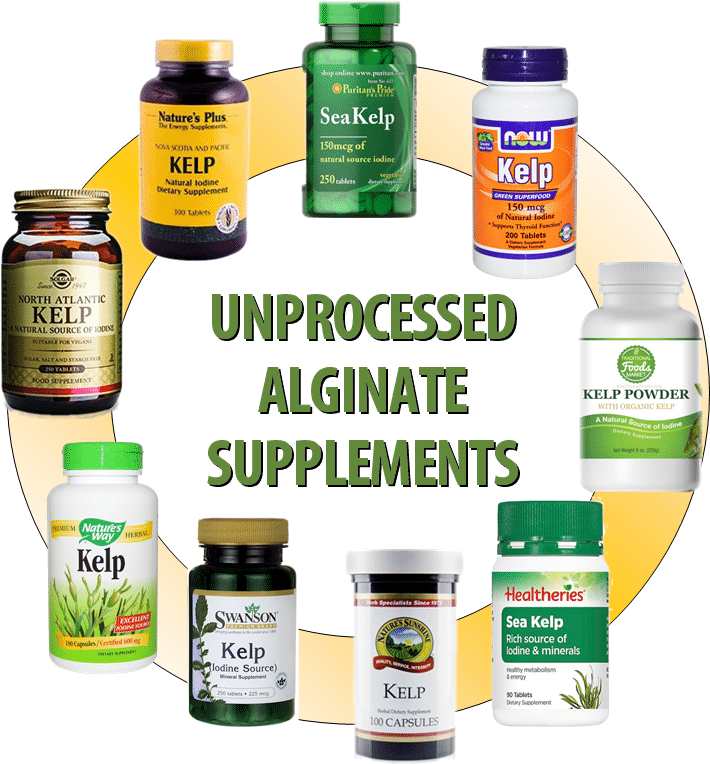 Kelp seaweed is the raw material that alginate is extracted from. Unlike land-based vegtable material, that is made up of cellulose, kelp structure is wholly alginate based.

Alginates are used for diet and in dietary foods for satiety purposes. It is mostly used in biscuits which when ingested swells in your stomach and when taken sufficiently gives you the feeling as if you are already “full”. With that, it dissuades you from eating more and becomes an effective dietary supplement. It has been found to have effects of increased satiety feelings as well as reduced intakes of energy. With that, it is capable of improving weight for obese people effectively.

Alginic acid is also capable of relieving acid indigestion and heartburn as it is able to keep in place the gastric contents. At the same time, it is capable of reducing any likelihood that the esophagus lining is irritated of reflux. On that note, some of the most common products used for treating acid reflux and heartburn that incorporates alginates include Gaviscon, Tums, Algicote, Algicon, to name a few brand examples.

Alginates, particularly sodium alginate powder have been used traditionally as a tablet adhesive agent. On the other hand, alginates are used as disintegrating agent or dissolver for rapid-release tablets. But, you must know, however, that the effects of sodium alginate as binder is based on the content and so sometimes can act as dissolver instead. When compared to starch, sodium alginates actually have higher mechanical strength for tablets.

One of the other uses of alginate is in the controlled release of some medicinal drugs and chemicals. When applied, the active ingredient of the medicine or chemical is placed inside a calcium alginate bead. When the bead is exposed in a particular environment, it then slowly releases.

In the recent studies, in the delivery of several drugs in controlled-release systems which involves alginate microspheres, it has been tested to have the medicinal drugs coated in chitosan so as to improve its mechanical strength. Some of the drugs that used this application include Nicorette Commit (GSK) and Isoptin/Biaxin/Dilacoron.